The playground outside of the Virgin Islands National Park headquarters is the ideal location for integrating natural landscapes, cultural history, trail guides, community meeting areas, and play structures with multiple opportunities for learning because of its location and established value/use as a community meeting spot.

After being hit by two category five hurricanes, the playground and ballfield next to the Virgin Islands National Park headquarters suffered substantial damage. Several play structures and the fencing surrounding the playground are in disrepair. In order to restore the area and provide a connection for children to the Park, a revitalized vision for the playground and adjacent ballfield is warranted. 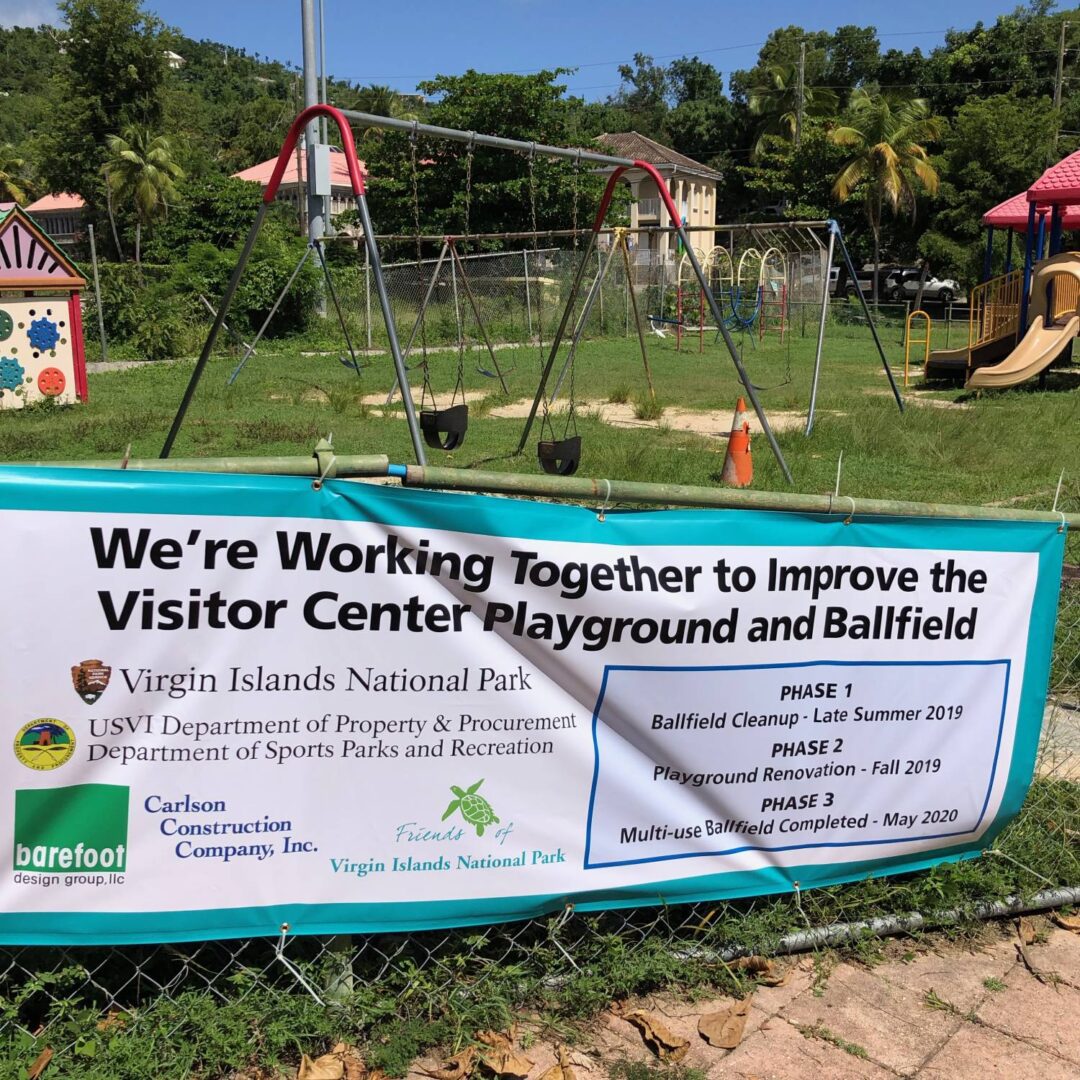 In Fall of 2018 at the request of the VI National Park Service, the Friends launched an initial fundraiser to repair the playground. More than $6,000 was raised towards the project in less than 24 hours! From that effort, community interest and support has continued to be strong. As of August 2019 more than $30,000 has been raised by dozens of individuals!

Designing a "Ridgetop to Reef" Playscape

The playground has been traditionally used heavily by local families, afterschool programs, summer camp programs, as well as school groups, and park visitors. Currently, it is the only public playground on the island. Additionally, the playground and its surrounding grounds (Visitors Center, pavilion, ballfield and adjacent land) provide numerous community groups with a meeting area. Most significantly, VINP’s Interpretative Rangers currently use the locale as a staging/briefing area for the Reef Bay and L’Esperance guided hikes. With improved design, this area would be ideal for additional VINP interpretative activities.

By reimagining the playground and the use of its adjacent lands as a ‘Ridgetop to Reef’ playscape will increase environmental education opportunities by providing space for park interpreters to meet groups and interpretive signs that teach children about their Virgin Islands National Park.

Steps away from the base of the Lind Point Trail and the National Park pier, the playground is uniquely positioned to be a launching area to the Park’s beaches, peaks, and reefs. In this way the playground and its adjacent lands are the true gateway into Virgin Islands National Park, in particular for youth. As such, the opportunity to teach children about the ecological and cultural significance of the park starts in the playground!

The Ridgetop to Reef Playscape seeks to:

Ridgetop to Reef Playscape Proposed plans
We Want to Hear From You! Please Click to Complete the Survey